Now get this: A qq spadek
Bartolome
6 Nov 2012
Off-Topic / The West Highland Way - 96 miles through some of Scotland most beautiful routes. [28]


we met two young lassies from the local climbing club
Damn, why it never happens to me, grrrr
Bartolome
11 Jul 2012
Off-Topic / The West Highland Way - 96 miles through some of Scotland most beautiful routes. [28] 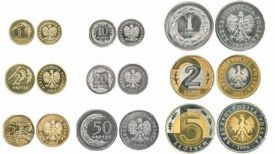 - all bank notes and coins MUST have an eagle with a crown - old PRL ones had an eagle without a crown
- no coins in current circulation are made of pure aluminium or silver or have a nominal higher than 5 zł (coins with higher nominals are only struck in silver or gold for collectors/investors and nobody sane would use them to pay in everyday transactions, since the intrinsic value of precious metal they're made of is much higher).

the Polish language = polszczyzna or język polski
Fix'd
Bartolome
17 Nov 2011
Work / I'm from Canada, and the latest victim of a Polish woman - one bites the dust [13]


try Youth Mobility program if you are under 35
Hehe, I'm still 'young', then, I'll try. Thanks in advance for any help. But first I've got to finish what I've started here.
Bartolome
5 Nov 2011
UK, Ireland / What do you like about living in Britain? [134]


English women?
You're lucky you're in Poland. Otherwise you could earn a couple of Glesga kisses for calling people here 'English' (not that I'm in a fighting mood, hehe). Contrary to all that talk about the evil foreigners 'destroying' Britishness, I'd say there's still a strong regionalism (which, after all, constitutes what Britishness is) across Britain, at least in Scotland.
Bartolome
31 Oct 2011
UK, Ireland / What do you like about living in Britain? [134]

Scottish Highland, the choice of beers, general easiness of life, prices/salaries ratio, quality of higher education, general helpfulness of strangers, various offices going online and some other stuff.
Bartolome
27 Oct 2011
News / Monument gets erected when a clique rules in a small Polish town [29]


and from what I can gather the monument isn't founded by the town authorities but by private founders
It doesn't really matter here. What matters is that it wil be put in a public, prominent place. If they like to waste their money for such doodle, they can even replace their tellys with such monuments if they like as long as it happens in their private confines.
Bartolome
27 Oct 2011
News / Monument gets erected when a clique rules in a small Polish town [29]


where did you conclude that from the news - how do you know Wołomin is badly managed?
I just think that this place (and Poland in general) doesn't need Kaczyński's monuments, since a)there are more important things to do; b) Kaczyński was such a controversial figure, that his monuments in public places will cause stir amongst locals. Also, the article clearly shows that PiS wants to erect this bust by an accomplished fact. The mayor evades an answer when asked about the issue. The formalities are not fulfilled.
Bartolome
27 Oct 2011
News / Monument gets erected when a clique rules in a small Polish town [29]

Setting priorities. Kaczyści have never been good with them. That's why you've missed it.
Bartolome
27 Oct 2011
News / Monument gets erected when a clique rules in a small Polish town [29]

You're missing the point, but I'm not surprised.
Bartolome
27 Oct 2011
News / Monument gets erected when a clique rules in a small Polish town [29]

Well, some build motorways, others build monuments.
I suppose this bust will be vandalised quite often. But sticking it in such a prominent place is provoking it.
Bartolome
27 Oct 2011
UK, Ireland / Poles working in Manchester, England - request for facts [34]

Yeah, I think it's worth pursuing. If I lived in Manchester I'd probably like to take part. Best of luck to you.
Bartolome
27 Oct 2011
Work / I'm from Canada, and the latest victim of a Polish woman - one bites the dust [13]


soil sampling, staking claims, mapping, slashing bush, riding in helicopters, etc.
Damn, is there a demand for such people? I'd love to do such a job.
Anyway, good luck in your endeavours.
Bartolome
5 Oct 2011
News / Do Poles take Kaczynski seriously!? [199]


Do Poles take Kaczynski seriously!?
Some definitely not. He doesn't deserve this.
Bartolome
6 Aug 2011
News / VAT, OFE, ZUS and costly dress under Tusk's government in Poland [48]


So you say Tusk's government with higher VAT and stealing money from OFE is better and less populist than previous one?
Populism would be something completely opposite: happily giving money away to anyone asking for it. Lepper was in favour of printing more: we've got short memory, don't we?

the amount of hypocrisy in the parliament has not decreased (I think even contrary) - malintent omnipresent- if this is peaceful 'boring times' then what kind of storm are we up to
We're already in a strom. I don't even want to imagine what would it be like under PiS-LPR-Samoobrona.
Bartolome
5 Aug 2011
Travel / Whats your favourite Polish city and why? [132]

I like Opole. Nothing really special, but I like it. If I find a nice job there, I'll come back.
Bartolome
5 Aug 2011
News / Andrzej Lepper committed suicide [98]


Parliament without Lepper and Giertych is not any better.
Blether. I'd rather live in 'boring' times than 'interesting' ones. Populist-nationalists are the last thing Poland needs.
Bartolome
5 Aug 2011
News / Andrzej Lepper committed suicide [98]

Yes, that's a surprise. He's always been in a 'fighting' mood. Luckily his populist party got voted out of politics (along with LPR, unfortunately PiS is still kicking aboot). 'Political death' got him, I wonder what were his motives to commit suicide.
Bartolome
5 Aug 2011
News / Andrzej Lepper committed suicide [98]

Latest news (in Polish) at gazeta.pl: 'Samoobrona' chief found dead in his office:

Andrzej Lepper is dead. Many years the leader Self Defense , Deputy Prime Minister in the government of Jaroslaw Kaczynski , was today found dead in Warsaw office party - inform the police . He killed himself . He was 57 years.

All indications are that he committed suicide by hanging. Probably we are not dealing with the participation of a third party - said Mariusz Sokolowski , a spokesman for the Warsaw police. Information about suicide also confirmed a spokesman for the ambulance . Andrzej Lepper before the hour was 17 at the headquarters of the Self-Defense at Jerusalem Avenue family member .
Bartolome
3 Aug 2011
News / Poland has most world's beautiful coin [13]

Poland's numismatics and coinage has always been strong. Congrats.
Bartolome
31 Jul 2011
News / Will Poland ever host the Olympics? [18]

What for? And if it ever happened, I'm afraid it would end up with a scenario similar to the Greek one: stadiums rotting away and a sh!tload of debts.

If Poland wants to organise such an event, it needs to embrace fully the concept of sustainability: not only the the event counts, but its aftermath as well. That requires an entire change of mentality, which is undergoing here in Britain: in the olympics context, the sport venues are designed so they can be used afterwards (e.g. newly built velodrome has been hailed as 'the most sustainable sport venue in the world'). Sports village for the 2014 Commonwealth Games in Glasgow is to be converted into a housing estate etc.

We'll see how the EURO 2012 and its aftermath will work for Poland and Poles. I'd say that its success or failure would be the critical factor for making a decision about applying for the Olympics organisation.
Bartolome
27 Jul 2011
Po polsku / Chciałbym słuchać polskie radio. Co polecacie? [6]

Probably anyone offered a post on some paradise island would go.
Bartolome
24 Jul 2011
News / Observations made by Her Majesty's departing Ambassador to Poland Rick Todd. [9]

He's a diplomat, isn't he? :)
But I can see much truth in his opinion about us. It's maybe too a rosy one, but can be used to describe a good chunk of our society. We like to argue, but often someone's arguments against ours are perceived as personal attacks or plain moaning.
Bartolome
9 Jul 2011
Life / How do Polish people in Poland respond to Polish people abroad....? [17]


However, I do sometimes have problems understanding when people born and bred in Poland speak?
Don't worry, I myself being a 'regular' Pole have problems with understanding some of my compatriots. However, as you'll soon see for yourself, using certain magic spirit (wink wink) raising liquid, which is a significant part of student life, will likely help you profoundly in broadening your horizons of the Polish language.