Tacitus owes Kashub anything
Apparently you fail to grasp the idea of legal continuity. Tacitus may not owe Kashub anything, but at the same time Germany can owe something to Poland. Modern Germany is the legal heir of the Third Reich and Germans build their image of a "moral superpower" on the fact that they admitted the crimes of Third Reich and accepted their consequences.

As far as the issue in question is concerned, Poland can take two approaches: moral approach or pragmatic approach. Let's take a look at both:

German reaction to Polish demands is somewhat disgusting (at least for people with weak stomachs) - on the one hand we have undoubted fault: unjustified aggression, millions of slaughtered civilians, country in ruins, works of art stolen etc. etc. and on the other hand legal tricks and small print from the times when Poland was a Soviet puppet-state (and even then, questionable legal claims). Basically, what Germany is saying now is: "Yes, we take the responsibility for III Reich's crimes", so Poland says "Well, then pay up", to which Germany replies: "No, no - we take the responsibility, BUT we won't pay - we don't have to pay because of X*". Absolutely indefensible approach and morally vomit-inducing. In this scenario, Poland cools down the relations with Germany, maybe even to the point of Polexit, seeing that Germans still think it suitable to block Poland's European funds and try to meddle in affairs not covered by European treaties (e.g. much needed judicial reform) and feel it also suitable to lecture Poland on democracy and European values (!). An unlikely scenario? Perhaps.

Germans are still Germans. People don't change that much in 75 years and certainly not nations or countries. They are still the 1939 Germans** but, luckily, they are much more pragmatic now, so maybe we should adapt their approach too. Sure it's unfair, sure it's disgusting, but for an average Jan Kowalski Poland in the EU, strong economic ties with Western Europe and wide cooperation with Germany is much more important than moral high ground and satisfied righteous indignation. So, if Germany gives up the meddling in Poland's internal affairs, we should adapt the pragmatic approach and keep the widely understood cooperation with Germany as an important part of the EU, and put the issue of reparations ad calendas Graecas. An unlikely scenario? Perhaps.

I would be inclined to adapt approach B. Having said that, German reaction surprises me. I would expect at least some sort of negotiations; certainly not the quick and cold "nein" that we heard. Surprising (or maybe not - see **). Oh, well.
GefreiterKania
9 Oct 2022
News / Poland Sports News [781]

Poland will play Czechia, Albania, Faroe Islands and Moldova in qualifiers to Euro 2024 in Germany.

I watched the draw but I didn't notice in which group Russia will play. I have to check again... oh, no... wait... I forgot that bandits who invade neighbouring countries and murder civilians are excluded from international football family.
GefreiterKania
9 Oct 2022
Po polsku / Koszałki-opałki, trele-morele i inne duby smalone :) [724]


I find the idea of a Polish socialist, after all that Poland has gone through, frankly, as disgusting as I find Polish fascists
Yes, socialism (and its more radical kind - communism) is as disgusting and vomit-inducing as fascism (and its more radical kind - nazism). Having said that, I don't think Pawian is a leftist. He hates PiS and is old enough to remember "good old days", and he can surely draw numerous analogies between PiS and PZPR (also personal analogies - there's literally throngs of post-communist PZPR apparatchiks in PiS).
GefreiterKania
2 Oct 2022
Po polsku / Koszałki-opałki, trele-morele i inne duby smalone :) [724]

Robert Lewandowski announced that in the coming World Cup he will wear captain's armband in Ukrainian national colours. He received the armband from Ukrainian football Legend Andriy Schevchenko. For some reason the nice gesture annoyed Russians.

Russia will not be allowed to compete in the 2024 European Football Championship over the Kremlin's invasion of Ukraine (...) UEFA has announced.
polskieradio.pl/395/7790/Artykul/3039980,Football-Russia-banned-from-Euro-2024

The qualifying draw for the Euro 2024 tournament, which will be hosted by Germany, is due to take place in Frankfurt on October 9, without Russia.


an actual noble top 1%
The actual noble top 1% were the worst c*nts, Jon. They were the ones collaborating with invaders (Radziwiłłs for example), blocking all social and economic reforms, and eventually leading to Poland's downfall in the 18th century.

The 10-20% of szaraczki weren't that bad - they were the ones in panzer cavalry banners, fighting and dying for Poland in countless wars, keeping the Polish language and traditions alive in the borderlands. They weren't too bad. But the top 1% were the c*nts of the first order and I would be ashamed to be in any way associated with them.
GefreiterKania
21 Sep 2022
History / The British Royal Family and Poland: Any connection? [70]

Can you abolish farmers? Monastic orders? Or taxi drivers?
It is not me, but you confusing things, Gruni. :) Farmers and taxi drivers are professions - not stany społeczne. LOL :D

And monastic vows can be revoked individually as well as the entire orders can be abolished (as it happened in history).

titles among Polish Szlachta is a foreign concept (...) can be considered a traitor and rightfully scorned
Oh, so you are not talking about those clowns today who claim to be counts, barons and princes? Good. However, at the height of its development nobility encompassed more than 10% of Polish society - mixed marriages throughout centuries could make anyone claim to be of noble ancestry today. This kind of nonsense has no place in modern society (unless it's for popular fun - a royal zoo, like in the UK), that's why it was abolished in 1921.

The fact that szlachecki stan społeczny został prawnie zniesiony means that nobody can claim to be a nobleman today. You can claim (God knows what for) noble ancestry and say that your family comes from some hrabia or książe but you cannot claim that you are a nobleman yourself. So there. :)
GefreiterKania
21 Sep 2022
History / The British Royal Family and Poland: Any connection? [70]


no Pole is a subject of any secular royalty
And, as I wrote above, nobility was legally abolished altogether in 1921, so if anyone today claims to be a count, he probably uses one letter too many. :D
GefreiterKania
21 Sep 2022
History / The British Royal Family and Poland: Any connection? [70]


...what happened to the Jagiellons?
The dynasty stopped because Sigmundus II Augustus (the last of Jagiellons) and Catherine Habsburg were childless.

On the 17th March 1921, Polish constitution abolished the existence of nobility. So ever since then there are no kings, princes, barons or counts in Poland (there are some still some c*nts though).
GefreiterKania
21 Sep 2022
Po polsku / Dyrdymałki o Niczem 2 [109]

Of course, Lithuanians will tell you that Casimir wasn't Polish but Lithuanian, but you should ignore them.
GefreiterKania
20 Sep 2022
Off-Topic / Most Hated Country in the World 2022 [67]


everywhere else
Hmm... let me think - do you beat everyone in the world in football? Right. What kind of feelings do you think this incites? :D
GefreiterKania
19 Sep 2022
Off-Topic / Most Hated Country in the World 2022 [67] 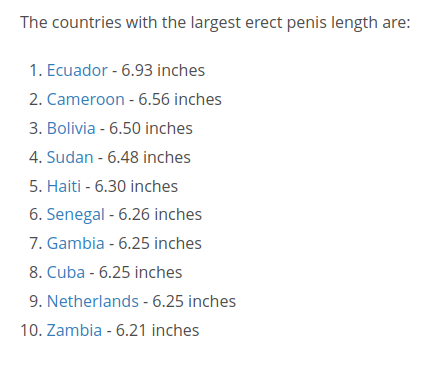 Do you think they measured erect penises for this poll? Of course not! They asked people about their sizes and gathered answers, and that's what the liars from Ecuador said:

...average male height of 1.67 metres (an entire nation of f*cking Tom Cruises) and they expect us to believe that they have penises that are 10.54% of their height (the only double figures number in the world)??? Lying bastards.
GefreiterKania
19 Sep 2022
Off-Topic / Most Hated Country in the World 2022 [67]

By the way, can anyone explain the suspicious absence of Ecuador in the Top 15 most hated countries list?

After the rape there were protests in India
Oh, so those Hindu are not that bad, if they are protesting against it. Maybe it's just some sick gang rape movement/cult or whatever (you never know with those pagans), not their entire society, so no point hating the entire country for it?

Both Polish and Western media were banging about it for a few days at least.
Must have missed it.

Anyway, I would remove India and put those bastards from Ecuador in Top15 instead.
GefreiterKania
19 Sep 2022
Off-Topic / Most Hated Country in the World 2022 [67]


Are you serious or are you joking?
No, seriously. I was never interested in Asian history or culture or anything really; and, just for the record, I consider everything east of Elbląg to be Asia, and India is a bit farther east than that, so there. Well, I apologise for not being a specialist on Indian everyday gang-rape culture. :( Sue me.

*Now I have to google this sh*t. I don't believe it. Hindus? The Harry Krishna people? Misogynistic sexist rapists? WTF?*
GefreiterKania
19 Sep 2022
Off-Topic / Most Hated Country in the World 2022 [67]